skip to main | skip to sidebar

Hi there! Long time, no see! 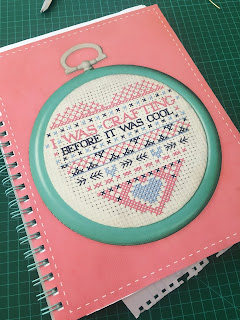 I've faced a few fitting challenges over the last year and a bit; first I lost a great deal of weight, so was sewing for a new size, then I've put most of it back on, so I'm back in my original size. That is hard to deal with mentally, but I'm determined to dress the body I have now - for the climate I'm in (which is HOT and HUMID!).

So, at the moment, I'm sewing all the summer things! I've bought a few new patterns to try, and the stash is still robust, so I'm all set to make a few things.

I have 2 resolutions for 2018:
So, the current project on my sewing table is a StyleArc Marilyn dress in black crepe, with animal print charmeuse for the sleeve lining. I've made several Marilyns before and I love the style. I'm going to be so sad when the cold shoulder/split sleeve thing falls out of fashion.

I don't have any progress photos to show at the moment, but I will share one of my previous makes:
I've made 3 others - with 2 of them still in rotation - but don't have photos of any of the others.
Posted by Kelley at 1:10 PM 2 comments:

Posted by Kelley at 7:58 AM No comments:

There have been a number of things underway in the sewing room this month.

1: Some general clean up and decluttering: 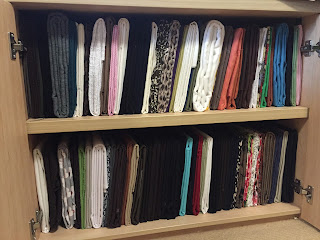 I still haven't finished (I'm about 70% of the way through my fabric), but after reading 'The Life-Changing Magic of Tidying Up' on the holidays, I've been inspired to have a big clean out. 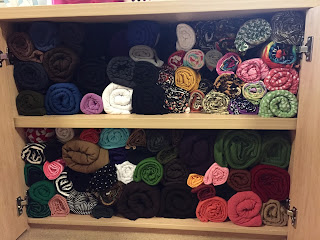 I've released some fabric into the wild that I just wasn't feeling the love for anymore, and did a big inventory of what was left. I also took the time to store my fabric neatly, so that I could access it more easily. I love opening the cupboard doors in my sewing room now!

My goal is to have all my fabric fit into the two cupboards. It's an ambitious goal, since that means I'll probably have to reduce the stash by 50%, but what have I got to lose? I realise it's going to take me longer than a year.

2: I made some Boxy Bags for Christmas gifts.


This decision was initially spurred on by my inability to toss out the pink spotty corduroy. I had originally bought this piece of fabric to make a coat for my daughter - several years ago. Inevitably, as children do, she has grown and I no longer have enough fabric to make the coat. It's too small a piece to make anything for me, but I just love it and couldn't pass it on. So, I'm going to turn it into a series of bags - some for gifts, and a couple to store my knitting projects in.

I used the 'No Guts Boxie Pouch' tutorial from So Chick. It was very clear. The only change I made was to the tabs. There was no way my clumsy fingers were going to be able to make those tiny tabs work, so I cut 2 pieces 3 inches x 2 inches instead. I then made sure to position them correctly when stitching down that part of the bag. It just gave me something a bit easier to hang on to in the previous steps.

I used a lightweight fusible interfacing for this bag, thinking that the corduroy would have sufficient body to support the boxy shape. It kind of does, but I wanted something with a bit more oomph for the next one. 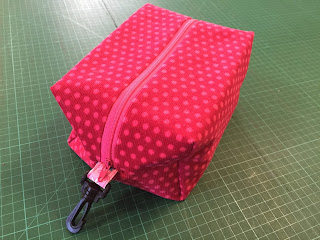 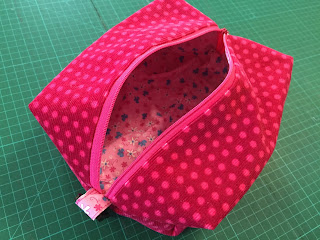 Version #2: Heavyweight denim (a remnant) lined with Spiderman cotton (not stash, specially purchased for this project!); Clasp from Spotlight 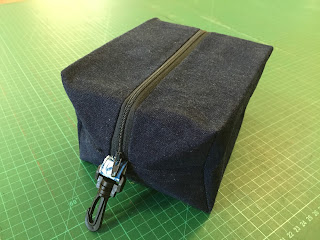 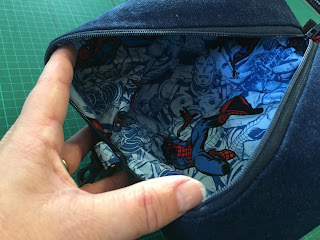 I used a much heavier weight interfacing for this one which made it almost impossible to sew. I won't be doing that again, and am looking for a medium weight fusible interfacing to make the rest.

I have followed the steps outlined in the Craftsy class: Customise your Dress Form. My husband has been such a great helper, and so has my daughter. Neither of them sew, but they both happily support all my crazy endeavours.

I'm almost there - the measurements are nearly spot on, but the proportion is just a little off. I had to put this project to one side while I knocked out a couple of the boxy bags above, but will return to this on the weekend.


Seems like January is the month for blogging for me! Ha. If I post one more time this year, I'll have doubled my posting rate from 2015. #lameblogger

I bought this pattern because Spotlight didn't have the McCalls 6559 that I was really after in my size when I went shopping the other day. This looked close enough and had a few more options as well, although no bolero patterns.

Disclaimer: The dress looks VERY different on the dress form as I haven't had a chance to adjust it to my shape/size just yet. She's very new (to me). 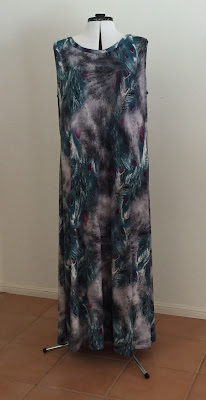 Changes for Next Time: 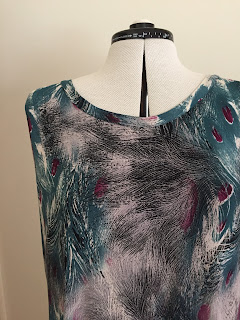 
I'm hoping that the recent acquisition of a dress form will increase the likelihood of photos being taken (and, therefore, blog posts written). Next step is to pad it out so that it really looks like my shape. I've just finished watching the Craftsy class 'Customise your Dress Form' and am itching to get going. I've got my husband lined up this weekend for a measuring and adjusting marathon, so hopefully I'll be able to move forward soon.

In the spirit of all things blogland, I'm going to make a list of goals related to my sewing that I'd like to achieve this year:

Living in Queensland means I have an almost constant need for hot weather clothing. I thought I might have a crack at next year's SWAP, but I'm keen to start adding pieces to my wardrobe right now. The weather is heating up quickly and I don't have anything to wear! So, I'm going to make a start now and see where the plan takes me. Maybe I'll be able to make something work for the time constraints, maybe not. But at least I'll have some clothes to wear this summer!

This is my plan. I'm going to start on the tops first as I have the greatest need for those. 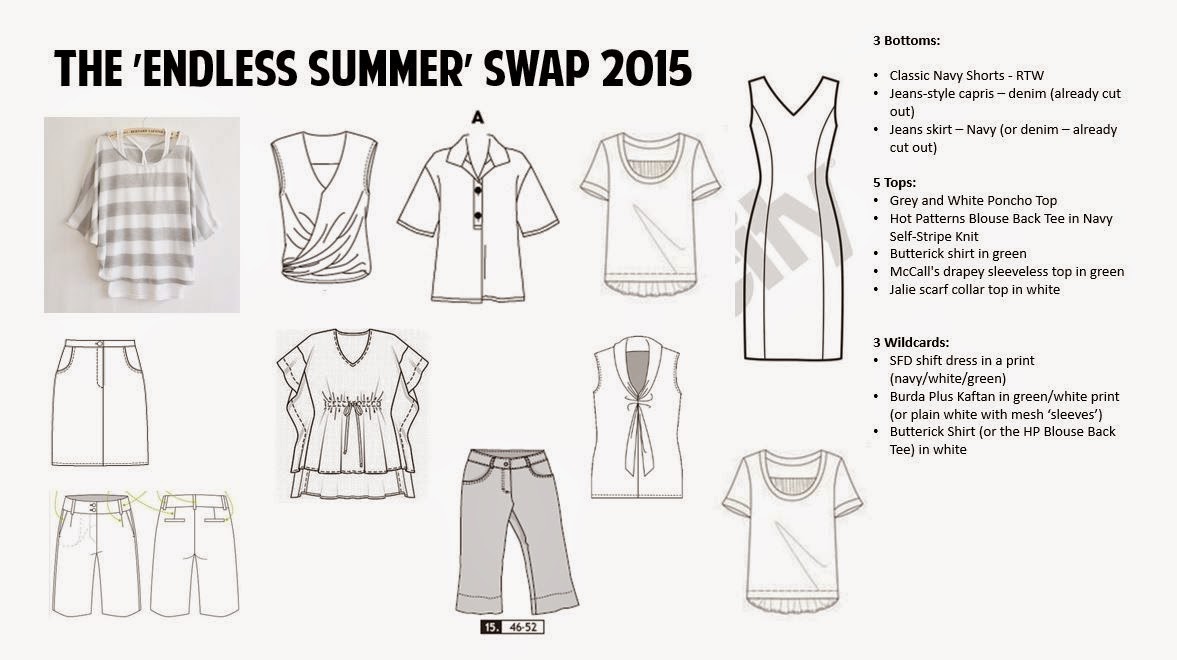 The colour scheme I'd like to try to work with is navy, green and off-white. I'm going to sew from stash as much as possible, so that might mean a few things aren't as perfectly co-ordinated as they could be. I'm OK with that.

I've already made the grey/white top and have purchased the navy shorts. I'm going to start on the navy top next (after a quick project for my daughter).

4th - 30 minutes sewing (went away for the weekend)

5th - 30 minutes sewing (went away for the weekend)

Review:
Did pretty well to fit in at least 30 minutes of sewing each day, given that we went away for the weekend and I had to go to work one day. Typically, I don't do ANYTHING crafty on a work day, but because I was tracking, I didn't want to ruin my streak, so I forced myself to do something very low key. Still, it counts!

I think this method has been a success this week as I have three completed garments and have made progress on another. It's been a long time since I've felt this productive!

Next week:
Need to tackle that Honey Cowl, and get those ends woven in. I've also set my sights on getting that tennis outfit finished and tidying up the loose ends of the Halloween costumes so I don't need to think about them again. Unfortunately, that requires a shopping trip, and I really don't like shopping.
Posted by Kelley at 2:38 PM No comments: