skip to main | skip to sidebar

Returning to Pants Fitting: It's a Win!

With summer fast approaching, I need to restock my wardrobe with shorts and capris. I'm certainly not adverse to skirts and dresses, but I do feel more comfortable in pants.

And so, I've returned to the Sure-Fit Designs pants blueprint. I was pretty happy with the first muslin that I made from this pattern, but the legs weren't hanging straight.

So, today, I made an alteration to my first version and sewed up another test pair. Amazingly, I think they are almost perfect. One leg has just the tiniest wrinkle - perhaps I need to let out the inseam on that side only - just a small amount, but at least then both sides would look the same.

(Warning: These are not the most flattering shots ever, but I thought they might be helpful to some other plus-sized girl struggling with getting pants to fit properly.) 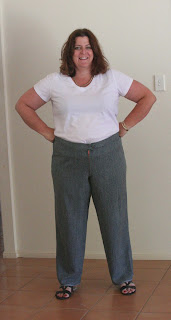 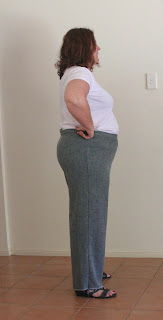 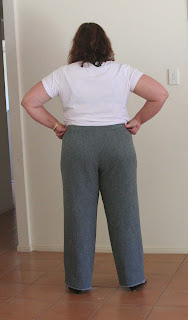 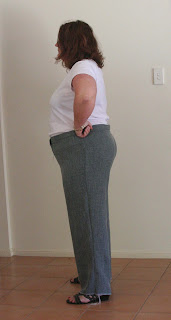 To make the alteration, I measured down 2" from the crotch seamline and drew a line straight across my pant leg (on both front and back pieces). This line was perpendicular to the grainline. I then cut along that line, leaving a hinge on the inseam seamline. I overlapped these 2 edges at the side seam by 2", which blended to nothing by the inseam. I figured out how much I needed to overlap by trying on my first muslin and pinning out the wedge. I just measured how much I had to pin out to get the legs to hang straight and transferred this to my pattern.


For my first 'real' pair of pants, I'm going to just add a fraction of an inch to the side seams from the hip up as the side seam looks as though it's pulling slightly to the back. I'll also add some length to the leg. They are almost the perfect length now, without having taken up any hem at all. This means I need to add a hem allowance to the current pattern. Not a big deal.

Can I just point out that this fit was achieved by the second muslin? That is outstanding, and I'm totally sold on the Sure Fit Designs system. I've got the dress kit and am now super keen to try that one. It might take a little while, though, because I'm going to be busy sewing up some new pants!
Posted by Kelley at 2:33 PM 10 comments:

Seeing as though I've got a sewing list a mile long for this summer, I thought I'd best get moving on it, starting with the easier garments first. Obviously, that involves sewing for my daughter as there is little fitting involved.

First up, she desperately needs some swimsuits. I'd purchased this downloadable pattern a little while ago on Etsy, and we were both keen to test it out. The fabric I used for the test garment (I've yet to get pictures on DD) was part of a bulk lycra buy-up several years ago from Make It Fabrics in Brisbane. DD informed me that she didn't like it as I was cutting it out. Luckily that tune changed because I'm pretty happy with the end result. 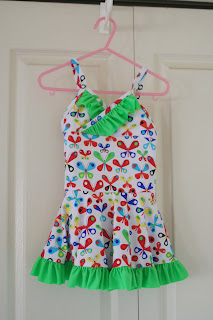 I used the ruffler foot to gather up all that green lycra. I set it to maximum rufflage for a super frilly look. The skirt ruffle was just over 2 widths of fabric. It gives the skirt a nice weight. I'd like to try a suit with a less frilly frill.


The pattern comes with more than 4 different variations.There are two different size ranges. We ended up with the 6 - 16 sizes. DD chose the suit which included an overskirt. She did check the pattern photos a few times to make sure I hadn't sewn it wrong, so luckily the final result looks pretty similar to the front of the pattern!

The writer of the pattern also has a blog where she has shown lots of different versions of this pattern.

As far as the pattern goes, it was pretty good, but there was some funky drafting, particularly with the skirt pieces not joining up properly in the pattern stage. I'd say that was more to do with digitising the pattern, rather than poor drafting.

The instructions were fairly good, but there were a few spots where I was glad I had some swimsuit sewing experience already. I think the pattern needed a little more testing/proofreading, but all-in-all, it's a gateway to a really cute swimsuit. DD has already picked out the fabrics for her next two, so that must mean it's a winner.

The fit was good. I have lengthened the body by 1/2" for the next pair.

Look, I've even managed to get photos on DD, and an action shot! 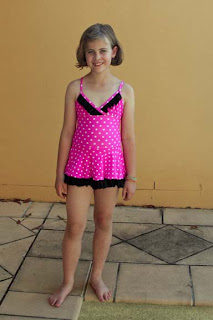 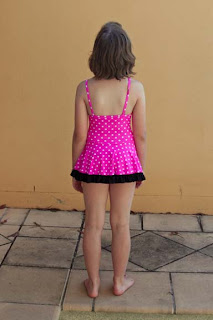 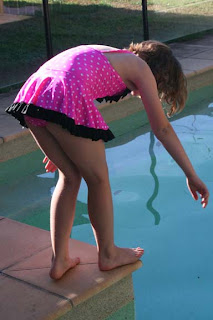 They performed well during this afternoon's swim and DD has already chosen the fabric for another 2 swimsuits. This time, though, she doesn't want the ruffles! Looks like I'll have to put my ruffler foot away again. :-)
I've also finished a 2-piece Kwik Sew set, but it's too big, so has been put away for next year. I've got to trace out the smaller pattern tomorrow and have another go. Stay tuned for more swimsuit action!
﻿
Posted by Kelley at 5:06 PM 17 comments: